Short review: ‘If This Is A Woman’ by Sarah Helm 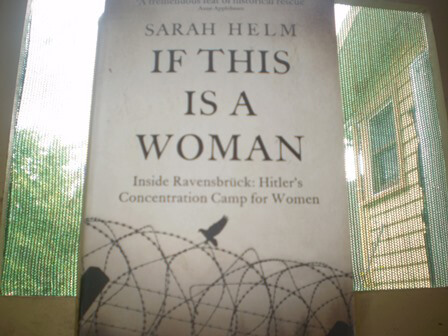 If This Is A Woman – Inside Ravensbruck: Hitler’s Concentration Camp for Women by Sarah Helm, 2015.

Excerpt from blurb: ‘For decades the story of Ravensbruck was hidden behind the Iron Curtain and it remains little known. Using testimony  unearthed since the end of the Cold War and interviews with survivors who have never spoken before, Helm has ventured into the heart of the camp, demonstrating for the reader in riveting detail how easily and quickly the unthinkable horror evolved.’

It took me two months to read this masterpiece by Sarah Helm.

It was exhausting. I read only a small chunk at a time and often put the book on a shelf for a few days before picking it up again. Sometimes, already emotionally depleted from the previous chapter, the heading of the next chapter filled me with such dread that I took a week off before re-entering the story.

Slowly, painfully, I was reminded of just how inhumane human beings can be; and how inhuman humans can be made to feel.

I’m pretty well versed in the dark side of human nature through my many years’ experience dealing with stories of rape, torture and genocide in East Timor during its occupation by Indonesia (1975 to 1999), and I already knew a fair bit about the Holocaust prior to reading If This Is A Woman. Even so, my mood sank pretty low during those weeks of getting to know the women prisoners and prison wardens who tell us what they did and why they did it, what was done to them, how they survived and how others didn’t.

That is not to say that this detailed history of Ravensbruck and broad overview of the war years in Germany is only about the very worst that can happen. Mixed in with the terror and horror and corpses are uplifting stories of beauty, courage, poetry, songs, laughter and survival against all odds, that filled me with awe at the courage and compassion of which people are capable. I also felt immensely proud of the author, Sarah Helm, for completing the heart-wrenching task of researching, writing  and finally giving voice to the women of Ravensbruck.

If This Is A Woman will bring you pain and sadness, make you sick at heart. It will make you laugh, but bitterly. It will show you more clearly than ever before what happened to millions of women as well as men in Germany during the second world war, and what it is like to be starved, experimented on and killed simply for being homeless, fatherless, lesbian, mentally unwell, sex worker, a single mother, Gypsy, Jewish, Communist or prisoner of war.

You will learn about the clever methods used to kill truckloads of people relatively quickly and quietly; and with the author, you will get to know the quite ordinary types of people that murdered babies, children, women of all ages. You will be shown very clearly that anyone – you or I included – is capable of committing the vilest atrocities; it is just a matter of opportunity and personal choice.

Difficult as this book was to read, on the night I finished it I didn’t
want it to end. I read every item in the references, appendices and
bibliography; I again pored over the photos. Then, once I was sure I had
finished, relief washed over me as I realised that it was over for me
and, except for the scars and memories, over for the Ravensbruck women.

On reflection, If This Is A Woman has reminded me to keep my compassion when hearing about people who are victims of torture, rape, sex slavery, ethnic cleansing, bombs, imprisonment, domestic violence, racism and prejudice. Because no matter how inhumanly people are treated, we are all human beings.

I highly recommend this book to anyone interested in human nature, human rights, the Holocaust and/or women’s history.

Keep posted for future articles about what I’ve been reading or watching.