A self-publishing case study: the path from handwritten MS to ‘printer stage’ 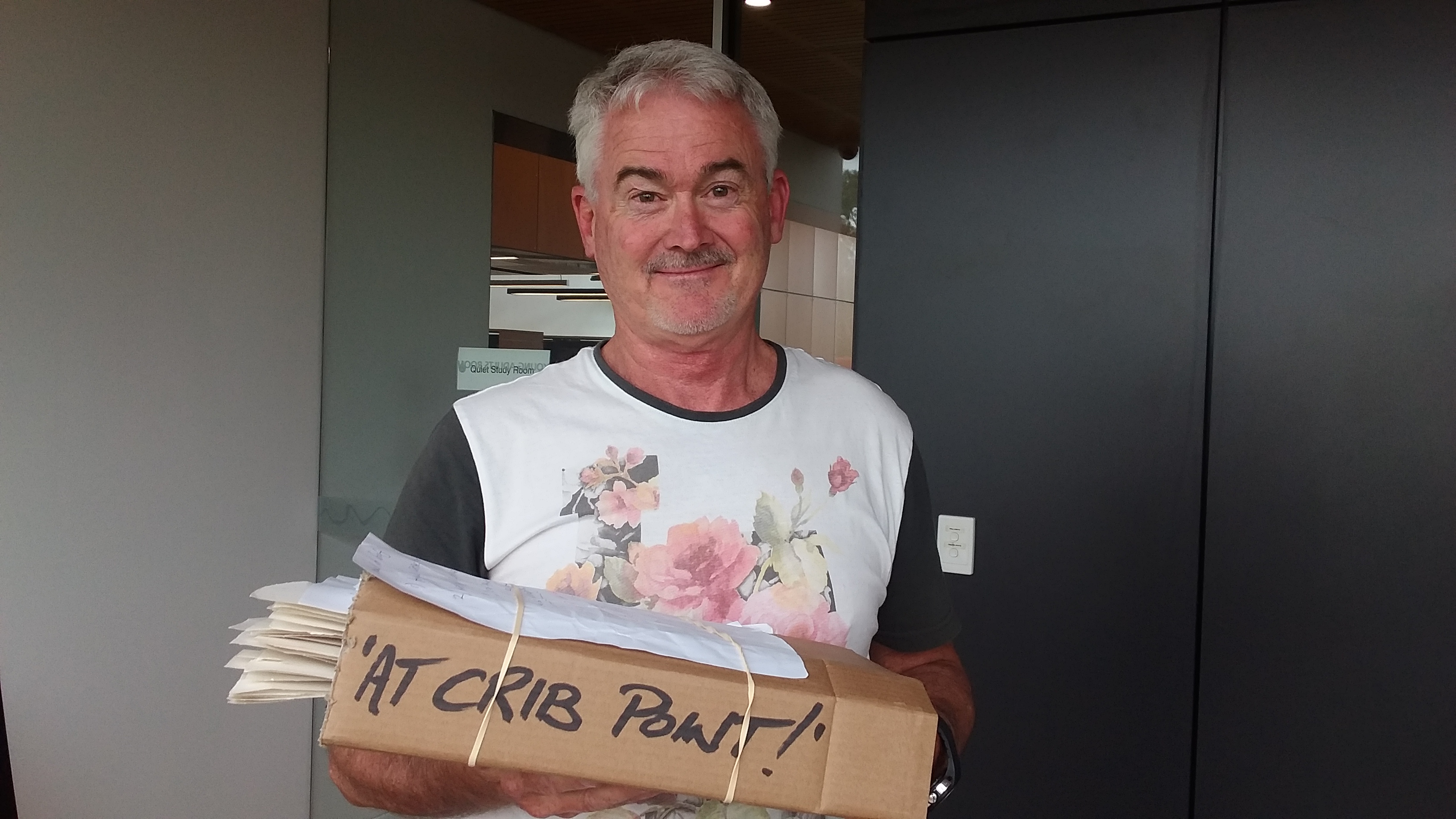 This case study is about a manuscript (MS) written by Michael Cusick in 2017-18, that was typed, edited and designed by On Time Typing, Editing and Proofreading, and self-published in mid-2019.

Michael Cusick first approached On Time Typing, Editing and Proofreading in October 2017, to ask if we could assist in typing  and publishing  his handwritten manuscript (MS) about the history of the Crib Point football, netball and cricket clubs.

It was at this point that both of us commenced our education in matters outside our previous experience: for Michael, self-publishing; for me, all things football, cricket and netball.

At that stage, Michael had been writing the book since early 2017 and had written the first forty pages or so of the football section. As he knew nothing about the process of producing a book, I explained the stages of self-publishing. After the MS had been typed, it would need to be edited (several times), designed and proofread before it finally went to the printers. I said I could give him some quotes for the different stages but that I wouldn’t commence working on any book until the entire MS has been written.

However, over several conversations, Michael’s sparkling enthusiasm for ‘The Book’ bubbled over through the telephone lines and I couldn’t help but be affected. Before I knew it, I was  offering to get the book typed up in sections, as he finished writing them, instead of waiting until he had finished the MS. Michael would deliver each handwritten section by hand, and another member of the Book Committee was obtaining and labelling the large number of photos Michael wanted in the book.

Obviously, I wouldn’t be able to commence the first stage of the editing process – structural editing – until all sections of the book had been typed; but the process of typing could be done in sections; as could the process of Michael self-editing (in handwriting) the typed sections, then those corrections typed into the MS, as they were done.

I submitted quotes for each stage of production (typing, editing, design, proofreading) to printer-stage and offered to coordinate printer quotes, liaise with the printer, obtain his ISBN, and check the final proof, at no charge.

The typing and preparation stage

We met for the first time when Michael handed over the first handwritten section to be typed in February 2018.

Over the next seven months, On Time Typing, Editing and Proofreading’s typist, Ruth Mooney (subcontractor), typed the MS in batches of Michael’s handwritten bundles. This included applying her excellent knowledge of football to her understanding of the MS and how to format it in the clearest possible way. She also typed in Michael’s handwritten corrections into the typed 1st draft of each section.

While Michael was busy writing and Ruth typing, I obtained quotes from printers and discussed them with Michael to choose the printer. Of the three printers I contacted, MinuteMan Prahran was both the cheapest; also, Viv from MinuteMan was the only one who actually rang me up to talk about Michael’s MS and their verbal style was professional and efficient. After considering all the quotes and my advice, Michael chose MinuteMan.

Michael collaborated with the Crib Point Football and Netball Club and Crib Point Cricket Club ‘Book Committee’ to work out how to obtain funding to pay for the publication process, and get all the information together that was needed such as photographs, different players’ stories and Club legends’ accounts of different historical events at the Clubs. As stories and information, and photographs, from other sources were received, I added them to the 1st Draft folder.

By September 2018, the 1st draft of the entire MS was typed and most of it self-edited. It was ready for the first stage of the editing process.

That was when I read Michael’s manuscript for the first time. I was impressed by his jocular, storytelling style that had me giggling many times during the editing process. His methodical approach from go to woah when writing the football section (which he wrote almost entirely himself), and Ruth’s ability when typing the MS to work out  how to keep the formatting consistent across whole sections, meant that a good portion of the book was in a consistent style, which would theoretically make it easier to edit.

However, Michael’s assumption (while he had been writing) that everybody knows the usual football terms and acronyms, not to mention the characters referred to, meant there were many things in the MS that needed to be clarified or elaborated on during the editing process; and the cricket and netball section chapters were written by a variety of authors which would mean much editing for consistency of style and format. And, as with all manuscripts, there would need to be the usual structural, line and copy editing to ensure the publication was highly readable, consistent and error-free.

Once the whole MS had been typed, I discovered that Michael’s originally anticipated 70,000 words that needed to be typed and edited had blown out into  120,000-odd words. I explained to Michael that this would obviously increase the cost of all stages of production and re-submitted quotes accordingly.

The title settled on by compiler Michael Cusick and the Crib Point Football and Netball Club and Crib Point Cricket Club was: Riding the bumps with a grin… At Crib Point! with the subtitle: History of the Mornington Peninsula Magpies.

I commenced the structural edit which necessitated intensive collaboration with Michael, covering how we would order the chapters, and break the MS into different parts and chapters to give it balance, where we would position photos, the sections that could or should be omitted from the book, the editing required to make the style consistent throughout the book, and a lot of other structural editing issues. The book required two structural editing passes rather than the anticipated one pass to get the structure right.

In January 2019, I commenced the fact-checking, and line editing which included the usual tasks: rewriting/editing to clarify passages and correct grammar and syntax, deleting unnecessary repetition, some re-ordering, advising Michael about photos that were not high quality and requesting replacements, as well as getting all the captions right. Two line edits were required by which time most of the photos were finalised, the grammar was mostly okay and the formatting style was consistent throughout, although the finer points of style (e.g. punctuation and capitalisation) still needed work.

Next came the copy editing stage, always a far simpler process than the previous stages as long as the structural and line editing have been carried out properly.

Throughout the latter stages of editing and proofreading, Michael and Janice Cusick pored over the MS for many hours, trying to find errors in the spelling of the thousands of names in the MS, and the thousands (even millions) of figures representing the all-important scores and other numbers throughout the book, and other errors that we (not knowing anything about football) might have missed. Their corrections were essential in producing a perfect MS (or, as we editors like to call it, ‘as perfect an MS as possible, given we are human’).

In March 2019, the MS was sent to Claire McGregor, On Time Typing, Editing and Proofreading’s intrepid graphic designer and editor (subcontractor). Claire designed the book as well as the bookmarks that would also be printed by MinuteMan Prahran, in InDesign, consulting with Michael or me when required. The InDesign files came back to Michael and me for close inspection, giving me the opportunity to make any last-minute recommendations regarding the style, order or formatting. Claire then proofread the designed manuscript, and sent it back to Michael and me for one final check. I  then sent Claire a long list of last-minute improvements and corrections (of things she could not have known needed correcting, which I should have told her about during the last checking stage), which she made to the InDesign file under great pressure to meet our printer deadline of 12 noon on 5/6/19.

We submitted the InDesign file to Minute Man Press Prahran and the printing stage began. We submitted the ‘final’ final proof files electronically and in hardcopy to MinuteMan Press in mid-June and the book was printed.

The Crib Point Football and etball Club and Crib Point Cricket Club launched Riding the bumps with a grin… At Crib Point! History of the Mornington Peninsula Magpies, compiled by Michael Cusick, and self-published by the Club, in August 2019.

Note: many thanks to Michael Cusick for allowing us to write and publish this story.

Photo: of Michael Cusick and the 1st draft. By Sally-Anne Watson Kane.