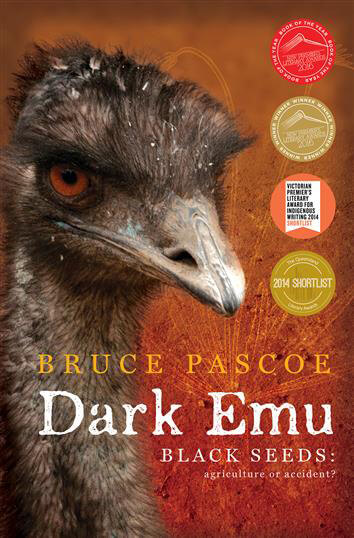 This is not a ‘book review’ as I’m only into chapter 5. But I am so excited by what I am reading I just have to let you know about it now, instead of waiting until I’ve finished.

Dark Emu is about the wealth of agriculture, husbandry and architecture practised by the First Australians prior to as well as (in some places) after European colonisation.

I’d thought I knew a fair bit about Australian history. But a huge amount of well-documented information describing the many different types of agriculture and husbandry practised all around Australia for thousands of years had been omitted – or shown only through a heavily biased lens – in all the books I had ever read, until now. (This, noting that I still haven’t read the one other book that’s been written about Australian Aboriginal agriculture: The Biggest Estate by Bill Gammage, which was published in 2011. I’ve  put it on my ‘must read’ list.)

Why this book is different

As Dark Emu demonstrates, during the late 1700s and throughout the 1800s, settlers and officials wrote hundreds of letters and reports that prove Aboriginal agriculture and husbandry – that is, farming – were very much part of Aboriginal life all over Australia. Dozens of articles on the subject have been published by anthropologists and other researchers since then.

What Dark Emu does that’s different to anything else I’ve ever read, is it brings together all that evidence about Aboriginal agriculture and husbandry that that’s been written over all these years into one book that is specifically about just this subject, so you can clearly see the facts for what they are, and how the pieces of jigsaw fit together.

This book clearly shows that what was and is still being taught to Australian kids in our schools, not to mention in our universities – that Aboriginal people were ‘subsistence’ hunters and gatherers – is merely the assumption of early European explorers and colonists: a wrong assumption that has formed the basis of almost all Australian history books ever written.

The European assumption that Aboriginal people were ‘uncivilised’ ignored the facts documented by those same explorers and colonists that describe how the First Australians were tilling the soil, planting and  harvesting crops, trading seeds including rice, barley and other seeds that were then milled into flour before being made into loaves and baked. They wrote down what they witnessed: the First Australians using well-crafted nets to capture waterbirds and fish, as well as building stone and brush fences to help them herd kangaroo and emu. Living in villages of permanent houses equipped with storage sheds of stone and timber, with pastures of yam and grain nearby. The ancient stone fishtraps used by First Australians to trap huge numbers of fish are constructed using an arch and keystone type of method to bind the stone walls to the land, but despite those fishtraps being well-known, their construction or age have never been investigated by any archaeologist. Why?

As well as being well-researched and factually-based, Dark Emu is incredibly well-written in terms of speaking clearly and plainly to its target audience – not academics, but normal people with an average education. Yet this book says what needs to be said quite clearly, is perfectly referenced and would satisfy an academic audience as well.

Much of the information in Dark Emu comes from accounts written by early settlers and explorers. A lot of the facts have been published over the years. But as we in Australia know, anything in relation to Aboriginal people or their culture or their history has historically, in Australia, been disdained or ridiculed or discredited by many non-Aboriginal people (including the media, historians and our country’s leaders) simply because it is Aboriginal. Therefore a lot of published information about Aboriginal architecture, agriculture and husbandry has simply been ignored. Just as some may try to ignore this book.

Now we have Gammage’s The Biggest Estate on Earth, and Pascoe’s Dark Emu , no one has any excuse any more, not to learn about the real history of Australia.

As I’m still only up to Chapter 5, I’m sure I’ll discover much more about Australian history over the past 65,000-odd years as I continue to read. Regardless of your ethnic background, if you are Australian I urge you to read Dark Emu.

Update: for a full review of Dark Emu  go to: Refreshing Australian History

Sally-Anne Watson Kane is owner/operator of On Time Typing, scribing, writing, editing, proofreading and self-publishing services. For more articles about her views on contemporary issues, books, movies and events go to:  Views and Reviews